Avast VPN vs NordVPN: Which Is the Superior Service? 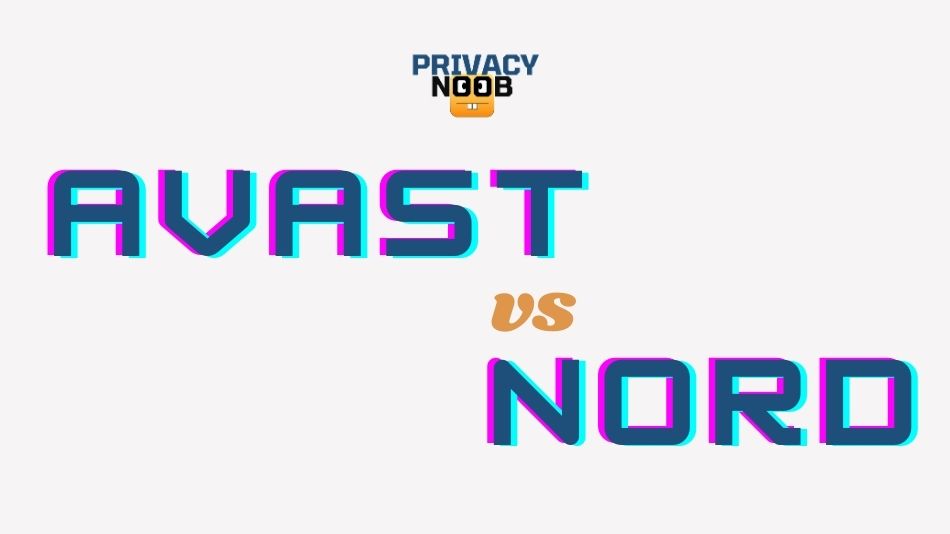 If you’re stuck between Avast VPN and NordVPN, you’ve come to the right place.

I’m going to compare both of these services based on their features, security, pricing, and more.

At the end of the post, I’ll choose a winner and give my verdict.

Between the two VPNs, Avast is a name you might already be familiar with.

From its humble beginnings as a cybersecurity software company, Avast went on to create the world’s best anti-malware application.

Today, Avast’s products are used by more than 400 million users across 59 countries.

All that, however, doesn’t guarantee that Avast SecureLine VPN will outperform other services.

So, let’s pit Avast VPN against NordVPN – and see which one is the better option for aspiring VPN users.

If you want to learn about the key differences between Avast VPN and NordVPN fast, refer to the following table:

At a glance, NordVPN looks better of the two, but let’s look at each virtual private network in depth.

In this section, I will dive deep into the different aspects that people typically analyze before choosing a VPN service. These will form the basis of my Avast VPN and NordVPN comparison. Let’s see how the two VPNs compare in terms of:

When it comes to privacy, you want a provider who is based outside of the 5,9, or 14 Eyes Alliance countries. Both Avast VPN and NordVPN meet this requirement.

Avast is based in the Czech Republic, a country that’s more serious about data privacy than, say, Great Britain. GDPR and similar laws regulate how Czech companies collect and handle user data. In addition, Czech Republic isn’t a part of the 5/9/14 Eyes nations, though it is willing to cooperate with them.

The last bit of information is sure to raise eyebrows. The fact that Avast’s jurisdiction is willing to cooperate with 5/9/14 Eyes countries makes SecureLine VPN less secure than NordVPN.

NordVPN is based in Panama, which is one of the best jurisdictions for VPN companies. The country doesn’t impose any data retention obligations on VPN providers and ISPs, and neither does it cooperate with any intelligence-sharing alliances.

Simply put, Panama is a safe haven for privacy-focused companies. And this is why I consider NordVPN to be safer than Avast VPN in terms of jurisdiction.

Both Avast and NordVPN claim to offer high speeds, so I conducted speed tests to discover who beats whom in this territory. My default speed without connecting to the VPNs was 28.66 Mbps.

First up, I tested Avast VPN on a nearby server in Singapore and got 22.72 Mbps in download speed. This isn’t bad by any means. I was able to browse and stream a few things easily.

The speed, however, reduced to 18.05 Mbps when I connected to a long-distance server in the US. Still, this surpassed my expectations as I wasn’t expecting SecureLine VPN to perform this well.

Then I connected to NordVPN to see if it was superior in terms of speed. Unsurprisingly, NordVPN performed better on both nearby and long-distance servers.

Even though NordVPN doesn’t have its own server network, that doesn’t prevent the company from offering both a secure and fast connection. So, if you’re wondering which VPN between Avast SecureLine and NordVPN is better for streaming and torrenting, you now know which provider’s app to install.

Although having a vast server network doesn’t guarantee that a VPN will do well in speed tests, it helps indicate whether the service will work in certain locations.

Avast VPN has 100 servers in 34 countries, which means its server network is quite small compared to NordVPN.

In fact, NordVPN has one of the largest server bases in the VPN industry. You can choose to go stream, download, or go online through more than 5,000 servers in 59 countries. This means NordVPN works in 25 more countries than Avast SecureLine VPN.

Overall, NordVPN has one of the best network coverage among comparable virtual private networks.

When it comes to online privacy, you want a provider that doesn’t keep logs of your activity or timestamps.

And while Avast VPN has a comprehensive privacy policy page on its website, the provider keeps connection logs of your IP address, timestamps, as well as the IP addresses of the servers you connect to.

In contrast, NordVPN has an “independently-audited” no-logs policy. And the provider has never been found to violate it. This means when you connect to Nord’s servers, your user IP, traffic logs, and timestamps won’t be recorded.

Another thing that makes NordVPN one of the best VPNs for privacy advocates is anonymous payments. While Avast SecureLine VPN doesn’t accept any form of cryptocurrency, NordVPN accepts more than ten, including Bitcoin, Ethereum and Litecoin.

All of that makes NordVPN one of the best privacy solutions out there.

To ensure a secure internet connection, both Avast VPN and NordVPN advanced tunneling protocols. However, NordVPN kicks it up a notch with NordLynx – the proprietary version of WireGuard Protocol. NordLynx ensures you get fast speeds with utmost security, leaving other protocols in the dust.

Besides, NordVPN offers a free SOCKS5 proxy, Onion over VPN, Double VPN, and a kill switch. With SecureLine VPN, you only get a kill switch for safeguarding your data when the service disconnects. Even though that’s all you might need to protect your privacy, NordVPN is clearly superior in terms of security.

Note: Both VPN services do a great job at hiding your actual IP address – leak tests will only reveal your third-party IP addresses.

As you can see, both Avast VPN and NordVPN are compatible with all major operating systems and device types. The only difference is that Avast VPN doesn’t work on Fire TV and Linux. This shouldn’t be an issue as most people don’t use these devices. Both VPN services also offer Chrome and Firefox extensions, and those using Avast also get their own secure browser.

But NordVPN lets you connect up to 6 devices (which can be any of the above) simultaneously, whereas Avast VPN supports a maximum of 5 connections. Based on these criteria, NordVPN promises greater compatibility to VPN users.

Streaming services are known to impose bans on virtual private networks, so I wanted to see whether Avast VPN and NordVPN unblock popular streaming channels.

Starting with Avast VPN, I was able to unblock Netflix, Amazon Prime Video, and Disney Plus. I also had no issues accessing international Netflix libraries. However, your experience might be different than mine – you may need to try a couple of times to unlock Japanese, Indian, UK, and other Netflix libraries.

I was, however, not able to access BBC iPlayer or Hulu through Avast SecureLine VPN. But all my complaints were short-lived as I tested NordVPN next.

NordVPN works great for all major streaming platforms. It also unblocks Netflix content libraries for all supported countries. And it offers a more secure, faster, and reliable stream. If you’re considering using a VPN to switch your favorite TV shows, seasons, and movies, I recommend NordVPN for high-quality video streaming.

If you’re looking to buy a VPN for the sake of downloading torrents, you’d be glad to know that both Avast VPN and NordVPN allow P2P sharing.

Avast SecureLine has around eight dedicated servers that support torrenting. You can connect to any of them to enjoy a smooth downloading experience. But Avast’s service doesn’t provide the same level of security as NordVPN.

NordVPN offers a range of P2P specialty servers that connect you with the fastest server in a nearby country, but what makes the service special is its obfuscated servers. Obfuscated servers use special algorithms to hide the fact that you’re a VPN, making your online activity look like a regular browsing session.

Based on the information, NordVPN is the safer choice for P2P torrenting.

No VPN comparison is complete without evaluating whether the services in question work in an oppressive nation like China. As in the case of streaming services, not many VPNs are capable of bypassing the Great Chinese Firewall. Avast SecureLine VPN, for instance, doesn’t work in China.

But NordVPN does, and it has some handy functionality to ensure its connection in China is as reliable as possible. The obfuscated servers that we discussed earlier help you combat China’s DPI (Deep Packet Inspection), whereas Tor over VPN gives you the privacy projection of the Tor network.

Avast VPN offers 24/7 customer support via phone and the recently introduced live chat option. It also has a comprehensive knowledge base and forum where you can find answers for many different queries. However, Avast doesn’t have any chatbot, which leaves something to be desired if you’re looking to get answers quickly.

NordVPN offers 24/7 live chat support, FAQs, setup guides, troubleshooting instructions, and more. Its customer service team is one of the best in the VPN industry. Talk to a NordVPN representative, and you’d know how knowledgeable and technically competent their support staff is. Plus, NordVPN recently introduced a chatbot feature that’s just as capable when it comes to addressing customers’ queries.

Comparing that with Avast SecureLine’s support which has no chatbot, the leading service in this area is none other than NordVPN.

When it comes to pricing, it’s worth knowing that Avast VPN has different pricing plans for 1 and 5 devices. The table above highlights the price for five devices, as I don’t many people who’d use the VPN on their laptop but not on their smartphone, tablet, etc. What’s clear is that NordVPN, despite being a superior product, will cost you less than Avast SecureLine VPN.

And if you’re looking to sign up for a monthly subscription, you can only use NordVPN as Avast VPN doesn’t offer a monthly pricing option.

Avast VPN vs NordVPN – Which Is Better?

Based on the analysis, NordVPN is significantly better than Avast SecureLine VPN. Not only does it offer you improved security and online privacy, but it also bypasses the geo-blocks of streaming services in a range of countries. Plus, it’s cheaper than most VPNs, including SecureLine. If you’ve had a difficult time deciding between NordVPN and Avast VPN, you now know which service to use for fast and anonymous surfing.